The campaign for U.S. Rep. for the newly redrawn 1st Mass. District heated up this week, with Andrea Nuciforo finally formally throwing his hat in the race in a kickoff bus tour of five western Mass cities culminating in Pittsfield. 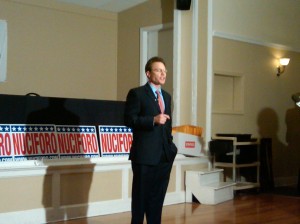 Current 2nd district Rep. Richard Neal responded with another campai- er, I mean “listening” visit to Pittsfield Friday.  I correct myself, here, because Mr. Neal keeps reiterating that his visits to towns and cities that are not currently  part of his constituency are not campaign visits.  These visits, he says, are just opportunities for him to get to know the areas he would come to represent if elected in 2012… in a casual, but media-covered way that lends itself to photo ops with popular area politicians and opportunities to verbally align himself with John Olver and Silvio Conte.

Well, you weren’t expecting an amateur, were you?  The man has been involved with political campaigns since George McGovern took on Nixon in ’72.

Meanwhile, Bill Shein is no slouch, either, as seen here in his WGBY interview this week.  One or two folks may have tried to paint him as some kind of comic outsider candidate, but it seems clear that neither the media nor the other candidates feel they can afford to take that position.  Quite the contrary, Shein’s an eloquent, poignant progressive with decades of experience around major electoral races, making a serious run to be the Democratic nominee, in a year when more and more Massachusetts liberals (and Americans in general) are moving onto the kind of anti-corporate, anti-lobbyist, anti-PAC page that Shein has already been on for years.

On Saturday, a variety of Democratic Caucuses were held throughout the Berkshires, including 5 of Pittsfield’s 7 wards.  These caucuses are being held to decide the delegates who will nominate candidates for U.S. Senate at Mass.’s  Democratic Party convention in Springfield June 2.  Not very surprisingly, Elizabeth Warren is considered by most to be the preferred frontrunner to go against Senator Scott Brown in the November election.

There seem to still be a lot of mixed opinions on the city’s heavy resistance to additional addiction treatment centers opening in key downtown areas.  Things moved forward this week with a move by city government to preemptively prohibit future attempts to open methadone and/or suboxone clinics in what is called the “arts overlay district,” as well as in off-north the area from around Columbus Ave to Summer Street-where Spectrum Health applied for permitting to open a clinic in 2011, and which contains large elderly housing complexes who voiced strong opposition to such a clinic.

This move would not effect the current discrimination lawsuit against the city by Spectrum Health, nor would it effect any already existing clinic, such as Experience Wellness, which opened on North Street in October 2010.  While most city officials and a majority of people involved in downtown venues and attractions have tended to favor such a prohibition, not everyone agrees, judging from the barrage of comments on this week’s story. 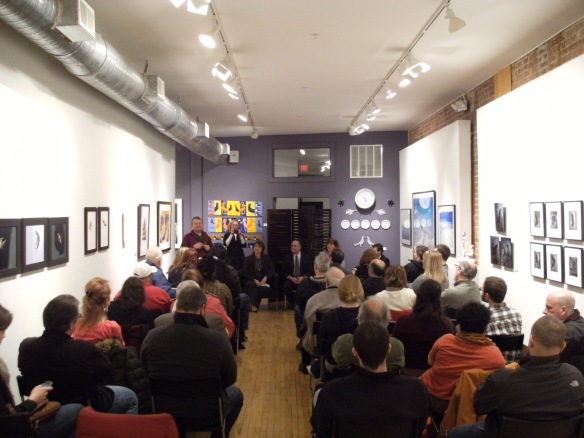 Pittsfield officials made some interesting comments on the local politics of art and culture at the Ferrin Gallery during a Tricks of the Trade discussion with our new statewide cultural czar, the Berkshire’s own Helena Fruscio.  A number of current and perennial issues came up, including the aforementioned addiction clinic controversy, PEDA, parking, and the still-contested vote to fund the Colonial Theatre.

In other cultural news, excitement is building around town for Pittsfield’s first ever major winter arts festival, the 10×10 which will run February 16-26 in what I have dubbed a “Decendium of Decagoguery”… yes, yes, I know.  My only defense is you should see how many latin Dec- rooted words I cut out from my original draft.

Check back at iPittsfield and Pittsfield.com for more updates and blogging from the scene of all this decaphilia starting in the next couple of days.

Mayor Bianchi discussed with the Berkshire Eagle some of what he has done so far to address the issues he talked about during his campaign, chief among them that of crime in Pittsfield.

Meanwhile, three men charged with murder in the March 2010 death of Jahda Martin in the Burger King parking lot across from former Club Groove on Wendell Avenue Extenstion will begin trial on April 30.

An expected ruling in an appeal by the Pittsfield Police with regards to charging 24-year old Meredith Nilan in the hit-and-run of Peter Moore on Winesap Road did not come this week, but word has it will be forthcoming from Springfield’s Judge William Hadley on Monday.

Though it had been suggested to me by Chief Wynn that new information might be available in the somewhat mysterious shooting incident two weeks ago, to date no major details have as yet been revealed. On Wednesday Lt. Michael Grady, who is heading the investigation, told me that it remains “ongoing” and that the identity of the man treated at BMC for a gunshot wound to the chest is still not being made public

In the realm of Non-news and Nontroversy, NO CHANGE was made to board chair of the Pittsfield Economic Development Board, despite a blustery announcement to the contrary by decorated journalist turned rumor-blogger Dan Valenti.  Dan announced in trademark all caps that as of this week’s PEDA meeting, Board Chair Gary Grunin had been replaced by Maurice Callahan, based apparently on a misunderstanding which occurred while trying to “cover” the meeting based on the agenda found online.  As this story and accompanying Facebook post were never changed or retracted, iPittsfield would like to clear up for those who may have been mislead, that no such change has been made;  Callahan ran Wedneday’s meeting simply because Grunin was preparing to leave on vacation.