A resilient crowd of 50 or 60 people braved the rooftop of North Street’s Greystone building Saturday night for the now traditional high-altitude opening party… a mostly familiar tapestry of local poets, artists, socialites, business owners, young professionals… a thinner crowd than in fair-weather past years, largely comprised of true WxW devotees.  Lots of others who, like myself, have fully and apologetically drunk the kool-aid of Benson & co’s Wordy festival madness and are along for the ride prettymuch wherever it takes us… sprinkled only very lightly with a few local Creative Economists whose job it is to be at such things.

I missed out on Sunday’s Head-to-Head Haiku events, though local author and poet Gabriel Squailia described a rousing competition at Y Bar that kept him up long after and late into the night thinking about it.

This I washed down with a couple of Blue Moons at the Lantern, to the haunting, yearning poetics and stirring vocals of Mieka Pauley, a songwriting treasure who performed at the first Word X Word festival four years ago.  Pauley seemed so natural and comfortable in this intimate gig at the small but acoustically fertile environs of The Lantern that you wouldn’t have guessed that she’d just come from opening for Lyle Lovett the day before.  Pauley charmed the crowd flocked there to see her, including one Vermont fan who’d first heard her play Bates College and drove down to Pittsfield to see her, and left all breathless with a flood of gorgeous sound as she crooned a set of enchanting originals and a couple well-chosen covers.

At the end of her set, it was back to Y Bar, which this week doubles as the WxW Writers Lounge, for a quick sip and yet another sighting of Squailia, aka DJ BFG, who is spinning a different flavor of crowd-pleasers each night  for a complete week of after parties following the wordy festivities.

The lineup continues tonight with a repeat of Page & Stage starting at 6, PechaKucha presentations at the Berkshire Museum at 7, “Some Good, Some Bad and Some Ugly” at the Bra & Girl store at 8, John Brodeur at The Lantern and Open Mic Allstars at Mission at 9, with more after-partying at Y Bar to follow…

With just a month before western Massachusetts decides who will represent its newly redrawn district, the U.S. Congressional race between Richie Neal, Andy Nuciforo and Bill Shein got a lot hotter and heavier this week…. though you might not know it to talk to people in some parts of the Berkshires, where the election of a new Register of Deeds still seems to occupy a majority of what attention there is on electoral politics this year.

The subject of the scarcity of debates, and the total lack of public debates agreed to by all three Democrats in this election finally came to the forefront this week, amidst a tangled mess of confusion between Pittsfield area news outlets over a scheduled debate here, one of only two sit-downs with the three contestants, both set for the week before the Sep. 6 primary.  Shein and Nuciforo both blasted Neal early in the week for accepting only two debate requests, both of which will take place in closed studios with little or no outside media access.  Neal’s campaign responded with a statement prepared a month ago, when uncertainty about the debate schedule first started to become evident, to which it added “In fact, Congressman Neal was the first candidate in this race to accept debates in Springfield and Pittsfield, both of which involve multiple media outlets and are already scheduled…. with campaign manager Matt Fenlon also stating ‘that if the remaining news outlets accepted the invitations he said were extended by the Berkshire County radio consortium, there would be at least eight news outlets involved in the coverage of the two debates,’ according to the Springfield Republican.

The second statement is only inaccurate, possibly unknowingly so, given the confusion and fumbled handling of the planned Pittsfield debate. The first, however, is blatantly, and knowingly, untrue.

In fact, the first request for a debate in Pittsfield was issued to all three candidates in January, for a public debate hosted by iBerkshires.com.  Shein and Nuciforo had responded in the affirmative by January 23.  I know this because I sent the request and coordinated with the campaigns personally.

Following many months of follow up calls and emails, Neal’s campaign finally responded in June, the first of several noncommittal responses over the summer indicating that an actual response would be coming shortly.  Unfortunately, it never came.

Even less response was received by Jonathan Levine at the Pittsfield Gazette, who in conjunction with Pittsfield Community Television extended an invitation to an August 27 debate to be held at Berkshire Community College.  The invitation was sent to each candidate personally via certified mail more than three months ago, but only Shein and Nuciforo responded.  To date, the Gazette has yet to receive any communication from Neal’s office, Levine told me Wednesday.

According to Fenlon Wednesday, Neal’s office was contacted by the Berkshire News Network  for a radio debate some time after the requests from iBerkshires and the Gazette/PCTV, and therefore some five months or so after Neal’s office was notified that Nuciforo and Shein had agreed to a the first Pittsfield debate request – a confirmation which directly conflicts with the official statement he released on behalf of Neal.

Of course, it’s all fairly traditional in politics for more well known, incumbent candidates to avoid engaging in many debates, which serve to increase the visibility and name recognition of their lesser known opponents.  And in this race, Neal is an incumbent, of sorts, as the longtime Representative of the Springfield area which will go from being in the 2nd Mass. District to the 1st at the start of 2013.

But as the Levine pointed out, and I tend to agree, a well-publicized public debate seems like it would prove particularly beneficial in Berkshire County, where it would offer an opportunity for interested area voters to see Neal for the first time.  The face time value should theoretically prove most valuable in Pittsfield, where Neal was largely unknown before this year but Nuciforo is a household name, and Shein a commonly reoccurring one- so it’s curious that of all the proposed Pittsfield debates, Neal would agree to not only the last-proposed but also the least public.

Curious, too, that they decide on one with a media outlet whose communications suggest they may not be that up on the issues and dynamics of the race, in fact doesn’t even seem aware that it’s for a Democratic primary- as the WBEC press release from the debate’s moderator Larry Kratka refers to Bill Shein as being a Green-Rainbow Party candidate. 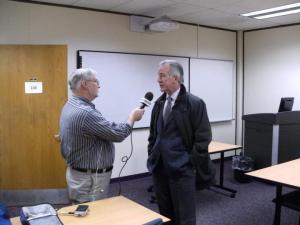 Berk. News Network’s Larry Kratka met Neal just minutes before my own first encounter with the Congressman. His debate request, though, came many months after ours.

The debate issue, though, was far from the only controversy this week in the congressional battle- with the ink barely dry on the flurry of contradictory  campaign statements over Richie’s debate declines, Bill blasted Andy Thursday for what he called “massive plagiarism” and “ongoing fraud,” releasing a detailed analysis of large portions of position papers and platform statements made by Nuciforo over the course of his campaign which were copied from various prominent Democrats.  Andy’s camp first decried Shein’s statements as “desperate politics,” but his campaign immediately began a major overhaul of his website, as documented by the Springfield Republican’s Robert Rizzuto, who’s provided excellent coverage
of this entire race.  Patrick Tool, who replaced Nuciforo’s previous campaign manager for unknown reasons earlier this summer, initially blamed a previous staffer, but later the campaign as a whole accepted full responsibility.

For his part, Richie Neal has mostly eschewed criticism- or even much mention- of his two opponents-  a notable exception being an interview this spring on WGBY’s Connecting Point in which he criticized both Nuciforo and Shein for deciding to run against Representative Olver, only to find themselves in a Hampshire County based district when the lines were redrawn.  Shein quickly corrected him, for though Nuciforo indicated his intention  to run for Congress in the Berkshires in 2012 as early as ’08, Shein first announced his intent to run on Monday, Jan. 16, of this year, citing concerns that “western Massachusetts was in danger of no longer having a bold, outspoken progressive voice in the Congress next January.”

Shein at a May Day rally in Pittsfield

Nuciforo at a Campaign Event at Mazzeo’s North in February.

Aside from such tangents, Neal’s official campaign strategy has largely ignored Bill and Andy- who are not mentioned once in several dozen press releases it has put out in recent months, which focus primarily on Neal’s positions on national issues and endorsements from major unions and prominent Democrats.

Amidst probably the most interesting U.S. House race for this part of the world since Olver bested Steve Pierce in’91 for the seat of the late, great Silvio Conte, Pittsfield and surrounding areas still have reserved much of their interest, and a majority of their lawn sign space, for the 3 way Harris/Phillips/Pignatelli contest… the outcome of which makes the least difference in actual practical impact on the public of any since…. well, probably the last Register of Deeds election.

It feels like maybe in these final weeks, though, that could be starting to change…. but I could just be kidding myself.  Kidding myself about public interest in elections and prospective voter turnout is one of my favorite pastimes.

At the end of the day, the seeming lukewarm interest about this election around these parts might be less an underestimation of the stakes as much as a perception of inevitability.   With Neal’s longtime Springfield base of voters significantly outnumbering those any of those in the more western counties with which it is now lumped, and his more than 2 million dollar lead in funding over his opponents, many local political pundits- even among those who support Nuciforo or Shein- have had Neal pegged as the almost certain victor from the start.

This sense of overwhelming financial advantage, I suppose, is a big part of why corporate campaign funding has been such a prevailing theme in this  race since the campaigning began… and relates intimately to why Pittsfield is poised this week to join the overall state of Massachusetts in issuing its own resolution in protest of the 2010 Citizens United decision which has resulted in the largest flood of corporate money into elections in the whoel history of the republic.